IIM Ahmedabad, IIM Bangalore and IIM Calcutta are undoubtedly the Top 3 institutes for management education in India. But which of these is the better one among the others? What does one do when he/she has to choose from 2 or 3 of these B-Schools? The final results for IIM Ahmedabad, IIM Bangalore and IIM Calcutta are already out; while some students are damn sure about which B-School they want to join, others have started enquiring about which B-School to choose among the three. In this blog, I have compared the 3 biggies as objectively as possible and hopefully this should help you to choose the best fit B-School for you.

IIM Ahmedabad, established in 1961, has a 100 acres Campus with baked brick style buildings designed by the famous architect Louis Kahn. The campus houses 25 dorms, each holding 25-44 students in single-person rooms.

IIM Bangalore, established in 1973, also has a 100 acre campus with an all stone architecture, lush-verdant woods and landscaped gardens. The campus has 10 hostel blocks with a single-person room for each student.

IIM Calcutta, established in 1961(some time before IIM A), has a very beautiful campus spread across 135 acres with 7 Lakes, a mini replica of Howrah bridge, a spaceship-like MCHV building and a new grand auditorium. The campus has 4 Large Hostels with single rooms – one of these hostels is co-ed (with girls in a separate wing). A fifth hostel, called the “Family Hostel”, accommodates students with families.

With the student intake in the range of 5-15% of each other, this criteria should not be a very significant factor in your decision process. IIM Ahmedabad seems to have the best male female ratio – just in case it is important for you;-)

The fees for the 3 institutes are almost the same – until a couple of years back IIM C used to be a couple of lakhs lighter on your pocket, not the case any more.

IIM A is not just about classroom  learning, which is talked about. There’s a lot of peer learning outside the class, learning from guest lectures and in general, by just being here. And if you were of the opinion that IIM A houses people who are only academic oriented, we have won the inter IIM sports competition three times in a row  now. :p

There is something in it for everyone. Great number of entrepreneurship opportunities, 50+ clubs and activity cells inside campus and a good sports and art culture as well. I might be biased, but this decision is an absolute no brainier unless you look at the Govt rankings taken out. But you would understand what to believe.
There is a great dorm culture in campus. With each dorm housing only 20-40 people , there’s a strong bond with your dorm mates as well.

In the second year you take subjects that you want. You don’t have to take a major specialization. You can try out different things and see your fit for yourself. It’s not about summer or final placements, which you would understand once you come here; it’s a place where you discover yourself and build a career

The engineers dominate the batch across all 3 B-Schools (why is no one surprised), but IIM Bangalore has significantly higher number of students belonging to the Commerce stream. So, if you are from the Commerce stream – you may just find more like-minded students in Bangalore than Ahmedabad or Calcutta.

The following could be reasons why someone could choose IIM Bangalore over the other two B-Schools:

1. One of the most beautiful campuses
2. Location at Bangalore means not only a good climate but also benefits like a Start up environment etc
3. Electives subject from the 3rd term itself, which no other IIM has
4. Highest diversity compared to other campuses. So networking happens in an effective manner and awareness increases about other backgrounds
5. New sports complex with swimming pool, tennis courts in Grass, Clay and Hard courts, squash courts etc which no other campus current have as far as i know
6. Average years of work experience amongst the batch is comparitively higher. So this gives a good perspective when we work with them in group projects
7. It is a Consulting and E-Commerce heavy campus from a job perspective
8. The selection criteria at IIM B is very different from other colleges, which brings more variety of people, like some are academically bright, some are good sports players, some have high work experience, some are from various different backgrounds, there are around 15 NRI students…

So all this makes IIMB a complete package and companies claim to have found overall better candidates here over other campuses.. at least that’s what they claim!

Should we even doubt this for any of the 3 institutes? The credibility of the 3 institutes is primarily because of the quality of education imparted therein.  While the pedagogy,  teaching style and academic rigour may vary from institute to institute – one can be assured that the final outcome will be more or less similar. IIM Ahmedabad is way ahead in terms of sponsored research and consultancy projects while IIM Bangalore has the edge when it comes to publications and citations. 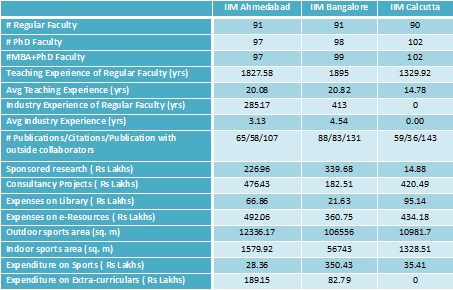 Source: As provided by the respective institutes for the purpose of rankings 2016 – https://www.nirfindia.org/mgmt. The data for industry experience and spend on extra-curriculars for IIM C seems incorrect – but I have put it up as given in the source.

If I were to give 5 reasons why choose C over A and B, these would be the reasons:

IIM Bangalore and IIM Calcutta have stopped releasing data with regards to the average salaries of the students – the data for the same has therefore been collated from the NIRF reports ).  You may take the data with a pinch of salt;-)

It is interesting to note that the recruiters lists for the Big 3 match each other to a great extent – there are only a few companies that exclusively hire from one of them. IIM A has a majority of placements in Consulting along with Sales & Marketing while Consulting is the forte of IIM B and Finance for IIM C. IIM C also had exclusive placements in the Business Analytics Domain. Having said this, you may join any of these B-Schools and expect a good placement irrespective of the function you wish to work in.

IIM A has always been at the forefront of using a unique case based methodology which has contributed to its successful pedagogy. A diverse peer group, exceptional faculty and a robust alumni network all contribute to an unforgettable experience at the red brick campus.

Another important data you may wish to consider is the number of offers given by each of these recruiters at the respective B-Schools. The data for the major recruiters as per the 2015 Placements is given below. 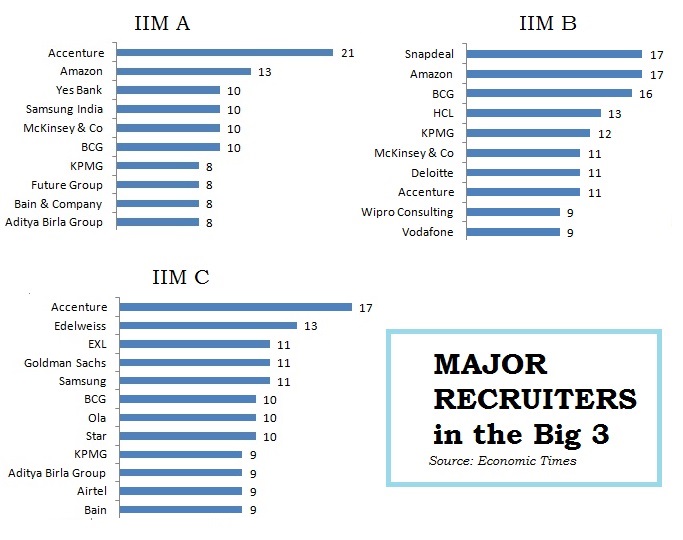 If you are someone who would want to graduate from the same school as someone you admire, here goes a list of notable alumni from the Big 3 B-Schools.

Apart from the known facts that IIM C is the mecca for Finance and has one of the most beautiful campuses, what sets C apart from the rest is something which only a very few know.

IIM C provides its students with a certain degree of academic freedom. Yes, the curriculum is very rigorous, but not in a way that it takes away all the time that you have. You are given opportunities and freedom to explore other avenues of growth apart from what is taught in the class. The college also treats you as mature adults capable of making your own decisions and hence, the entire administration is governed by student run bodies. The freedom that I have talked about here is sometimes misconstrued as the college being a ‘chill campus’.

Talking about facts, we have one of the best incubation centres and tie ups with a lot of VCs. The IIM Calcutta Innovation Park has incubated numerous startups in the last 3 years, Zostel being one of them.

IIM C is also a part of the CEMS MIM program, the only Indian B School to be a part of it.

For those who give credence to the various rankings, find below how the three premier B-Schools fare in the various ranking released last year. The core programs of IIM A, IIM B and IIM C are ranked in the Global MIM (Masters in Management) rankings of FT – and the same has been considered in the table below.

Verdict: IIMA vs IIMB vs IIMC

IIM A is generally preferred over B and C – thanks to the strong perception that it is the best B-School in the country. But I have known quite a few students who have preferred C or B over A – and they have not regretted the decision. Apart from the parameters mentioned in this blog, other parameters like Location, Electives offered, Exchange Program and the culture of the institute could also influence your final decision. Evaluate which of the parameters are more important to you and decide accordingly. Choosing between A, B and C is a good problem to have – if confusion prevails simply go by your instincts and you would have most probably taken the right decision.

Disclaimer: While due care has been taken while compiling this blog – the author advises all aspirants to do their own due diligence before using or acting on the data provided.

GMAT PS: You will never need to do heavy calculation